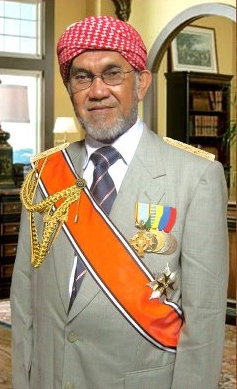 The Head of the Royal Family And Royal Sultanate House of the Maharaja Adinda Aranan.

The Honorable Chairman of the Council of Royal Datu's the Hashemite Sultanate of Sulu Darul Islam .

The highest Royal Patronage of the Norman Academy in Rome, Republic of Italy.


His Royal Highness, represents the legitimate Royal House and Heirs, and is the Successor to the family of the Second Heirs Apparent, (that of His Royal Highness the Maharaja Adinda Aranan), to the throne of the Hashemite Sultanate of Sulu Darul Islam.

He was born in the Territory of Pandameh Island, Sulu On December 9, 1954 and has been exaggerated in the State then migrated to the island of Palawan and to Cagayan island, Tawi-Tawi around the 60's and had his early education in English Primary School Cagayan. After graduating from English primary school, he was moved to tambisan Island, Sabah wishes to continue studies with a family who has long lived in the area since the era of the reign of the Sultanate of Sulu in the state.

In 1968, he entered military training under the regiment team (RAW) and received military training in Peninsular Malaysia. During his service in the military of the Royal Malay Armed, He has recruited in the peninsular states consisting the state of Negeri Sembilan, Selangor, Malacca, Johor, Perak and the East Coast of Peninsular Malaysia on the grounds that the family business but he has ceased to serve and pursue a career in business. He was began in business at around 70's.

At around the same year of 70s, his first marriage and the latter has failed to produce offspring, he eventually married for a four times, his third wife descent of Tidung tribe and was blessed three sons that is Datu Muhammad Abdullah (Elder), Datu Muhammad Raden Satria, Datu Muhammad Ayatuddin and the youngest daughter but finally utterance, died in abortion.